Warning: Declaration of ET_WC_Product_Variable_TB_Placeholder::get_available_variations() should be compatible with WC_Product_Variable::get_available_variations($return = 'array') in /home/debwendon/nativeorchid.org/wp-content/themes/Divi/includes/builder/module/helpers/WooCommerceModules.php on line 818
 Update on Proposed Zoning Amendment in Brandon | Native Orchid Conservation Inc. 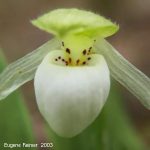 proposal to change the zoning of a parcel of land just outside the Brandon city limits from “agricultural” to “rural residential” was rejected by the Minister of Indigenous and Municipal Relations and the amendment cannot move forward. Although the subject land does not at present have small white lady’s-slippers (Cypripedium candidum) on it, the lands to the south and west are designated as Critical Habitat under the Recovery Plan developed by Environment and Climate Change Canada under the federal Species at Risk Act. NOCI was concerned that groundwater critical to this orchid may be impacted by the installation of potable water wells, septic fields and overland surface drainage.

NOCI may have had something to do with the decision because we were the only ones to speak out against the motion at the public hearing although various provincial branches also advised against it. However, we still need to be vigilant because there are other colonies of the small white lady’s-slipper that reside within the Brandon city limits that could potentially be at risk of impacts from development.
.